Was It Revised?: Yes, in 1968 by David Grambs, the last of his four revisions after 6: The Shore Road Mystery, 12: Footprints Under the Window and very recently 27: The Secret of Skull Mountain.  That represents two 9 ratings and one 6.  Which will his fourth revision get, the 9 end or the 6 end?

Cover: Rudy Nappi.  There’s yellow, there’s red, got some blue, and a lot of brown.  Instead of the boys peering at danger, they are investigating the secret of the lost tunnel.  Yes, a massive spoiler is placed right on the cover…

Setting: Bayport and then Virginia.  This is another Frank and Joe Down South story.

Where’s Fenton This Time?: Testifying in Washington.  Until Chapter XX, of course.  Saves the boys’ life. Of course.

Which Chums Show Up?: Chet.  Appearing to send them off down south are Callie, Iola and Helen Osborne (who?).

What’s Chet’s Hobby This Time?: Photography.  Yup, gets used.  But I have an official complaint: In 22: The Flickering Torch Mystery, Chet’s hobby is building airplanes from parts.  Yet in this story, Chet says at one point, “I’d sure like to learn to fly these things.”  Are you kidding me?  Seven books ago he’s building an airplane, yet he can’t even fly the things?!

Aunt Gertrude’s Dessert: Apple pie, the basic staple of pies.  Then it’s off down south for the rest of the tale.

Plot: Military general wants to hire Fenton to find some gold his ancestor was said to have buried, but reluctantly hires Frank and Joe when Fenton is called away to Washington.  Frank and Joe go down south, start sniffing around, and go figure, a gang of crooks is looking for the same gold.  Threats and knocks on the head ensue.

Review:  Not my favorite.  It’s almost a by the numbers attempt to get in the elements of a Hardy Boys book, but it doesn’t fly.  It’s a simple treasure hunt, if said hunt was accompanied by homicidal maniacs willing to kill you to get to the treasure first.  So actually, yeah, a simple treasure hunt.  It just doesn’t work as well as it should.  Goodbye Mr. Grambs, thank you for the two 9s you gave us, sorry about the two 6s.

Was It Revised?: Yes, in 1966 by David Grambs, and the first one he revised since #6, The Shore Road Mystery (which I liked a lot and gave a 9) and #12, Footprints Under the Window (which I thought was merely OK, and just gave a 6).

Cover: Rudy Nappi.  Classic Nappi, great action moment with a landslide coming down the mountain, and Joe carrying a skull.  All described in the book, folks.

Setting: Bayport, and surroundings.  We never travel too far.

Where’s Fenton This Time?: Hanging around house waiting for word from Chicago, or headed to Chicago, because while the interesting crooks get to be rounded up by his boys, it’s Fenton who takes down an entire syndicate.  Show-off.  But he shows up at the end like the sheriff does at the end of each Scooby Doo episode.  Speaking of which, isn’t this a classic Scooby Doo title, The Secret of Skull Mountain?  Can you just see Shaggy’s legs quivering as he hears the gang’s plans to travel there?

Which Chums Show Up?: Chet, the third Hardy Boy by this point considering how often they include him, and how often he includes himself for Aunt Gertrude’s fine meals, making himself her personal gourmand.  Then there is Biff and Callie and Iola.  Fans of Callie Shaw: this is your book.  She gets to do some detective work and does a fine job of it.  I’m not kidding, she actually does well.  Frank should be proud.

What’s Chet’s Hobby This Time?: No hobby this time.  You’d think his fly fishing from the last book would come in handy by the lake in this book, but noooooo….

Aunt Gertrude’s Dessert: Your patience has been rewarded!  Not one, not two, but three different specific desserts are mentioned here: “generous slices of cherry pie,” as well as apple cake and a seven-layer chocolate nut cake that the boys use to bribe Chet into coming to Skull Mountain.  No, seriously, that’s how they convince Chet.  What?  It works.  Meanwhile Gertrude gets in a snide remark about how the Hardy house is “worse than a railroad station!  People racing in and out any time they please, expecting Laura and me to run a twenty-four hour restaurant service!”  You tell ’em, Gertrude!  You probably had to put down your copy of The Feminine Mystique to cook these beasts their food on demand — nah, she loves it, especially Chet who actually shows appreciation for the grub.

Plot: Something’s wrong with the water supply in Bayport, and the planned new dam that will be up on the lake by Skull Mountain is running into all kinds of resistance.  And a suspicious plumber is up to something.  And it’s amazing how people start acting all hillbilly just a few miles outside of Bayport which is, I remind you, in New York State.

Review:  Good job, Mr. Waller Jr. and Mr. Grambs.   This is classic Hardy Boys, a good mystery that is actually quite straightforward, a scientist is kidnapped, locals are threatening but of mixed motive, the bad guys are suitably rough, and the story moves along.  Plus Frank gets to have a solo adventure in the bay that is quite physically challenging.  And at the end the boys figure it out themselves, and they defeat the bad guys themselves.  Plus the cover is good, and Callie helps out, and Chet does a good job.  I will note that it’s always amazing how these boys will plunge into dangerous situations with little regard for personal safety, just as long as they can solve the mystery they will jump right in.  I hope we never get The Dante’s Inferno Mystery or these boys will be plunging into something they won’t get out of so easily. 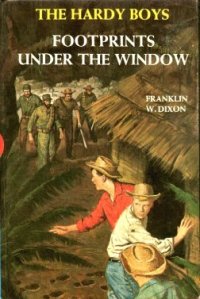 Was It Revised?: Yes, in 1965 by David Grambs, one of four he did and the first since The Shore Road Mystery

Cover: Rudy Nappi, red and yellow as is typical.  Plus green foliage and tan roof.  Frank and Joe and Chet face down a gang of desperadoes who don’t need no steekin’ badges!  Oh sorry, so many South American cliches in this book I got carried away.

Setting: Bayport and an island off the coast of South America

Where’s Fenton This Time?: Gone until the very end, at which point he performs his usual job and SAVES HIS SON’S LIVES.  Again.

Which Chums Show Up?: Chet, Tony, Iola and Callie.  But other than Iola getting a bag of hers stolen, not much goes on with the others except for Chet who might as well be the honorary third Hardy boy in this book he does so much.  And Jack Wayne shows up prominently to fly them back and forth to South America.

Plot: Top-secret microfilm is at risk, and tourists from South America are having their bags stolen, and a laundry gets into the plot, and footsteps are seen under some windows, and Fenton is off doing who knows what.  And tell me this isn’t EXACTLY a line from Scooby Doo: “You catch on fast,” [SPOILER] said mockingly.  “The warning sign I put up here and the ghost legend helped keep people away — But not you nosy kids.”  Heh, you can’t tell me the Scooby Doo writers weren’t Hardy Boy fans when they were young!

Review:  Just OK.  Lots of investigating which gets interrupted by a trip to South America where they encounter a dictator’s gang (so 1960s!), fly back, get locked in a  tomb (!) and have a race to the finish when things look bad.  But the Coast Guard is made to look like an unstoppable force when they show up.