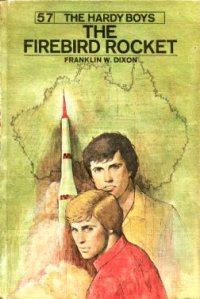 C’mon, Who Really Wrote it?: Vincent Buranelli in 1978.  The third of three in a row he wrote, and now we say goodbye to Mr. Buranelli.

Was It Revised?: No.

Cover: Rudy Nappi.  I like this one, with the dominant green in the Australia background, the rocket blasting off, and modern Frank and Joe (with 70s haircuts) bringing the classic red and yellow back.

Setting: Bayport, Princeton NJ and then Australia. Let’s see, they probably figured, the boys had been up and down North and South America, all over Europe, to Japan, and also Africa.  Hey, let’s send them down under!

Where’s Fenton This Time?: He sends them off to investigate, but he shows up before the end to help rescue his sons and catch the bad guys.

Which Chums Show Up?: Chet, Biff, Tony, Phil, Iola and … whoa!  No Callie?  You finally include Iola, Mr. Buranelli, and leave Callie out?!  Anyway, it’s Chet’s show as usual.

Aunt Gertrude’s Dessert: No dessert for you today.

Plot: The Firebird rocket program is in trouble because its top scientist has been kidnapped.  Frank and Joe go searching for him.  All the way to Australia, mate.

Review:  Another good Buranelli.  I like this one a lot.  It has a very straightforward mystery, with the question of who is or is not a bad guy.  They go off to Australia and do the tourist thing while tracking down the scientist.  The bad guys are suitably bad.  The scenery and local color is cool.  Fenton does his suave thing at the end.

I will note this one sentence as being dated:

“This is one thing Women’s Lib did for us.”