C’mon, Who Really Wrote it?: John Button in 1942, the fifth of his five books in a row.  Mr. Button is now done with the Hardy Boys.

Cover: Rudy Nappi.  Is there red and yellow?  Not really.  We seem to be going into the abstract period now, and this one is blue, blue, blue.  Frank and Joe fence, someone stares at them behind a mask, and a broken blade reminds us of the title.  It’s OK, well made.  I’m not as big a fan of the abstract ones.

Setting: Bayport, and California, this is Frank and Joe go to Hollywood, sorta, which is nothing like Frankie Goes to Hollywood.  Just sayin’.

Where’s Fenton This Time?: Oh, he goes on vacation with the missus until they both show up in the most unlikeliest of places.  Fans of Laura Hardy — this is your book.  She actually gets to help.  Briefly.  Then the Hardy Boys syndicate shuts her down real quick and we get back to normal.

Which Chums Show Up?: Chet (honorary Hardy Boy at this stage), Callie and Iola, Biff and Tony.  Only Chet gets the big part, and no, I’m not making fun of his weight, which is more than I can say for Frank and Joe for whom no occasion is so solemn as to prevent them from making fun of Chet’s weight.  Way to show empathy, boys…

What’s Chet’s Hobby This Time?: Fencing, as is also the hobby of Frank and Joe and Biff and Tony, not one of whom ever fences again, but they are expert enough in this book to get hired on the spot as fencers and trusted enough to run a fencing school by themselves.  Mr. Deming, we figured out your interest in life, and you crammed it into the plot.  Still, if you have a kid who likes the idea of fencing, this is his book!  But don’t turn your back on that kid…

Aunt Gertrude’s Dessert: “Pieces” of rhubarb pie, three of them for Chet.  Aunt Gertrude never made fun of Chet…

Plot: An inheritance inscribed on a blade, but the blade has been missing for decades.  Wanna bet the boys find it by chapter XX?  Hey, Frank and Joe, we never found Jimmy Hoffa, wanna take a crack at it?  Anyway, the clues lead to Hollywood, an odd screenwriter, a movie being made, and enough crooks running around to baffle anyone trying to make sense why this case is that important.  Mostly everyone fences.  Yeah, we get it, Mr. Deming, fencing is cool, or something.

Review:  Eh.  I’m a little tired of the boys getting on a case involving, say, broccoli, and then suddenly every crook in town is suddenly into broccoli, and willing to kill to keep you from discovering they like broccoli.  Hey, I think I smell a new Hardy Boy mystery: The Clue of the Overcooked Broccoli. 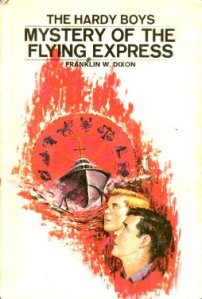 Was It Revised?: Yes, in 1970 by Vincent Buranelli, one of two he would revise, though he also wrote five of the later books entirely on his own..

Cover: Back to Rudy Nappi.  Is there red and yellow?  Well, lots of red all right, but the only yellow is Joe’s hair.  This is the first of the abstract covers.  We have Frank and Joe in the foreground, the Flying Express in the background, a zodiac chart over the boat, and abstract red everywhere.

Setting: Bayport, and Providence, a long ferry ride away to the south.

Where’s Fenton This Time?: Up to his usual business, elsewhere most of the time, calling on Sam Radley to go back and forth as needed.  He shows up now and then.

Which Chums Show Up?: Chet, Callie and Iola.

What’s Chet’s Hobby This Time?: Horoscopes, as if the cover didn’t give it away.  Sorry, this hobby annoyed me.  We have no indication he has this interest before this book, and it’s completely dropped after this book.  This isn’t like picking up archaeology or oil painting.  You can believe someone might dabble with that for a while and then quit.  But astrology is a mindset.  Chet is so incredibly into this mindset in this book, it’s jarring that it gets dropped.  This is bad writing.  Forcing a character to take on something that makes no sense for him to take on.  Oh well, as Frank says in the book, “The solar system isn’t all that concerned about our doings here at Cape Cutlass.  Saturn is millions of miles away.  I doubt that it’s going to interfere with our little airplane.”  Amen, Frank.

Plot: Makes no sense.  The owner of the hydrofoil Flying Express wants to set up a ferry service between Bayport and Providence.  Competing businesses don’t want him to.  Attempted murder attempts follow repeatedly.  Wait, what?!  They can’t just offer a better ferry service, they have to try to KILL PEOPLE?  What nonsense.

Review:  Horoscopes everywhere, a plot that makes no sense, Joe says “groovy” at one point (holy ’60s, Batman!), I’m sorry this one is not for me.  At one point Chet takes an old dress (long story) and simply tosses it into the ocean!  I’m sorry, but in 1970 there was enough of an environmental awareness that this strikes me as a clunker of a move.  Hey, Chet, why are you polluting the ocean when there are garbage cans right over there?  Meh, this is my least favorite Hardy Boys book.

Was It Revised?: Yes, in 1966 by James D. Lawrence, the last of his three revisions.

Cover: John Leone, his third and last cover with Rudy Nappi taking over again for the rest of the series.  As usual, Frank and Joe are wearing red and yellow (in fact, Joe is himself wearing red and yellow — way to take one for the team, Joe!).  Night scene, old house, ghostly figure approaching — yup, still in Scooby Doo territory here.  I’m telling you, Scooby Doo owes a debt to the Hardy Boys.  Let’s see, if Chet is Shaggy, and Frank is Fred, and Callie and Iola are . . . naaah, it’s not THAT much of a pattern.

Setting: Bayport, nothing but Bayport and its surroundings.  Why go anywhere else when major international criminal enterprises decide Bayport is a happening place?

Where’s Fenton This Time?: Chicago mostly, waiting for a break in the case that never comes.  Even when he makes his usual Chapter XX appearance, this time he doesn’t save the day.  Frank and Joe have it all wrapped up by then.

Which Chums Show Up?: Chet, Callie and Iola, Tony.

What’s Chet’s Hobby This Time?: Nuttin’.  Well, being scared, but willing to help.

Aunt Gertrude’s Dessert: Lemon pie.  But Gerty is described as making other pies that the boys are too busy to eat, so who knows, maybe the author would have described more pies if they had stuck around.

Plot: Jewel thieves in Bayport.  I know!  As if there could be any jewels left in town by this point!  Plus an old house in the middle of nowhere that has a floor that disappears.  Plus blood-curdling (I believe that would be the appropriate cliche) screams in the night, a dog that growls, someone whose dying words talk about “…the floor,” yes, it’s a humdinger of a Scooby Doo mystery here.

Review:  I like this one.  Good mysteries involving a laughably elaborate plan to fool someone into going to the 6th floor of a building instead of the 5th floor (think Mission Impossible – Ghost Protocol – see folks, all of modern fiction derives from the Hardy Boys), a floor that appears and then disappears, suitably tough jewel thieves, high stakes action, a mysterious message from Jack Wayne as he seems to be flying for the bad guys, and it’s all in Bayport with Chet around to get spooked by the ghost.  Oh, right, that ghost.  You don’t really think it’s a ghost, do you?  Remember, Scooby Doo territory here!

Was It Revised?: Yes, in 1969 by Tom Mulvey, the last of his five revisions.  I like each of his previous four quite a bit.

Cover: Rudy Nappi, red and yellow (if you look for it), but mostly red, red, red.  And the usual spoiler being revealed.  Frankly, this is a Scooby Doo cover.  You can just picture Shaggy and Scooby wandering the museum at night while a sinister pair of eyes peer at them from the suit of armor.  As usual, the Hardy Boys anticipated and set the pattern for Scooby Doo.

Where’s Fenton This Time?: Right there working with the boys.  And yes, saves the day in chapter XX as is typical.

Which Chums Show Up?: Chet, and Iola briefly.

What’s Chet’s Hobby This Time?: Archaeology, but only briefly mentioned in order to get two jokes at Chet’s expense in the middle of the book, and then repeat the joke as the book’s final line.  And it ain’t that funny.  No, this looks like the author knows McFarlane typically gave Chet a hobby, so he would too, but he doesn’t know how to embed it into the story.

Aunt Gertrude’s Dessert: Oh, she’s too busy clucking that no good will come from [whatever the Hardys are doing, that always leads to good coming from it].

Plot: A pirate king with his own island, two freighters being used for no good, a series of museum robberies.

Review:  Again this doesn’t read like a McFarlane.  Lots of stuff happening, but it’s more of a procedural about working on ships, on how to rob a museum, etc.  Not that interesting or typically Hardy Boy-ian.

C’mon, Who Really Wrote it?: John Button and Leslie McFarlane in 1938 — Wait, what? Leslie McFarlane  took a break after this one, as he really wanted to do as he didn’t think much of these “juveniles” that he wrote for money.  So this one was partially written by him and partially by Button (unbeknownst to McFarlane).  Editing mixed them together into a bit of a mishmash. Don’t worry, though, McFarlane will be back for another few books starting with #22.  For now, it’s Mr. Button.

Was It Revised?: Yes, in 1966 by James D. Lawrence, one of three he revised and the second in a row after A Figure in Hiding.

Cover: Rudy Nappi, red and yellow as is typical, but this time the Sleuth is shown in a gorgeous night shot with the lighthouse in the background.  Very solid cover.

Setting: Bayport and its surroundings, with a couple of jaunts to Manhattan.

Where’s Fenton This Time?: As usual, on a case that is related to this case.

What’s Chet’s Hobby This Time?: None, he must be bored.

Aunt Gertrude’s Dessert: Nothing.  Again!  Tivoli the Great Dane gets treated better than the boys in this one.  I’ve already posted a complaint to the Great Dane Society, so relax.

Plot: A King Tut-like golden bust worth — pinky to  mouth — ONE MILLION DOLLARS, a sunken ship near Bayport (natch), a couple of rival deep sea divers, you know, the usual.

Review:  Doesn’t read like a pure McFarlane, that’s for sure.  This one has all the characters, but it’s off.  I do like the climax though where some kindness shown comes back to reward the boys.  It’s not a typical climax, it’s more of an adventure at sea ending, not the crooks holding a gun to the boys ending.  You know what I think?  In 1966 James Bond was HUGE.  Thunderball had already come out with its Oscar-winning underwater photography of skin divers fighting.  I’m guessing the rewrite tried to capture a bit of Thunderball.